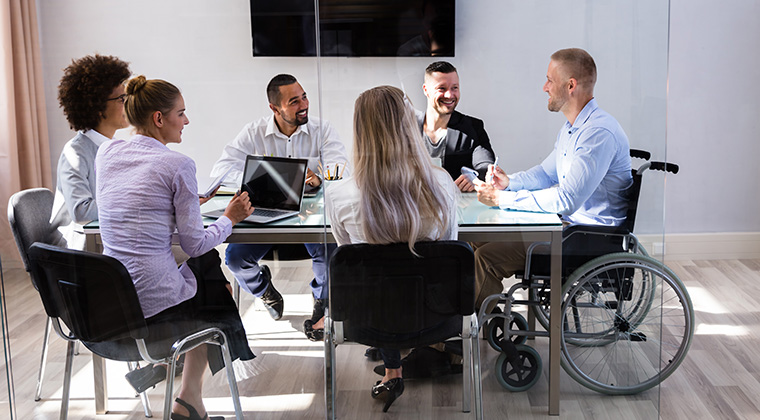 Modern organisations champion inclusivity to widen their talent pool. The goal is to create a company that better represents the customers they serve and benefit from differences in thought and outlook to produce world-class organisations that attract and retain the best talent.

However, while performing some testing with a financial institution, we came across a set of findings that set us thinking: there are greater feelings of presence, closeness and excitement for the Virtual Reality environment.

A Virtual Meeting Room is a service that allows people to work with each other using modern meeting room facilities, like whiteboards, in a virtual environment. Accessible from anywhere, with security built in, it allows employees to feel a high level of immersive engagement with what’s happening in the meeting, even though they may all be located anywhere the world.

However, the most surprising aspect to be revealed in the experiment was that the use of Avatars in the Virtual Reality Meeting Room was preferred to the video by the women participants. This realisation points to a possible de-biasing effect for Virtual Reality environments, and while by no means conclusive, opens up an exciting area for further research.

A team at University College Dublin wanted to look at a comparison between current and future collaboration technologies and started to examine the differences people found between using Virtual Reality technology and traditional video conferencing.

A team at University College Dublin wanted to look at a comparison between current and future collaboration technologies and started to examine the differences people found between using Virtual Reality technology and traditional video conferencing.

A link to the academic paper is here.

The research took place at the Bank of Ireland Workbench in Dublin and was open to all members of the general public who visited the space throughout the study. The recruitment of the participants was voluntarily, and participants were informed beforehand about the experiment and asked whether they would agree to take part. In total, the survey wanted, and got, 100 participants.

The results supported several assumptions we at meetingRoom have had since we started to create our Virtual Meeting Room Platform.

Specifically, there are greater feelings of presence, closeness and engagement for the Virtual Meeting Room collaborative environment.

The official definition of presence is the state or fact of being present, as with others or in a place. However, within the study, the experience of presence meant that the participants were more focused and shut out any external distractions. In one case during the experiment, a set of participants needed to be briefly stopped as they had forgotten that they were in a public space surrounded by people and had moved to topics of conversation deemed personal.

Closeness was the physical element to the experience, where participants could not ignore the other users in front of them.

Engagement, for completeness, measured levels of excitement that added to the sense of engagement.

Furthermore, women participants reported that as other participants could only see their avatars and not see them physically, it allowed them to focus more on the meeting.

One very telling post interview exchange demonstrated this clearly to the researchers. For context, all post-experiment interviews were done separately to ensure anonymity. A participant reported that she felt the other Avatar was not able to intimidate in the same way would have been possible in a video call ie those with a lot of experience on video skills. A separate participant stated a dislike for the Virtual Reality experience as he felt unable to apply the same leverage over the other participant as he did when on a video conference ie couldn’t use a technique from a video call on the VR system.

As already mentioned, while we do not want to overstate the case for Virtual Reality in diversity and inclusion programmes within organisations, there appears to be the possibility that it may have a use in de-biasing interviews and meetings in the future. It is not a long term solution as once users assign attributes  to a given avatar, their original biases will return.

It may be that we reach for Virtual Reality when companies want to attract, engage and retain people from a range of generations, faith and belief systems, gender identity and expression and socio-economic backgrounds.

What is a Virtual Meeting Room